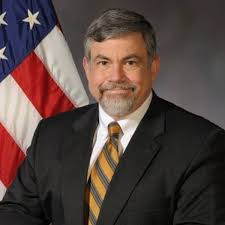 Mr. Howard was appointed as Maryland State Prosecutor by Governor Larry Hogan on November 7, 2019, directing the investigation and prosecution of public corruption, official misconduct, election law violations and other crimes throughout the state.

A Maryland native, Mr. Howard was born in Baltimore and raised in Dundalk.  He graduated with merit from the U.S. Naval Academy in 1980 and served for five years as an intelligence officer in the U.S. Marine Corps. After leaving active duty, Mr. Howard attended the University of Maryland School of Law, where he was Editor in Chief of the Maryland Law Review, graduating with honor in 1988.  He subsequently clerked for the Honorable Francis D. Murnaghan, Jr., U.S. Court of Appeals for the Fourth Circuit.  In 1989, Mr. Howard was appointed as an Assistant State’s Attorney (ASA) in Baltimore, prosecuting misdemeanor and felony crimes.

Continuing to serve as a reserve officer, Mr. Howard transferred from the Marine Corps to the Navy Reserve.  In 1991, he was recalled to active duty for the Persian Gulf War, and assigned as a counterintelligence agent with the Naval Criminal Investigative Service (NCIS).  At the conclusion of the war, he accepted a civilian position as an NCIS Special Agent, conducting and managing criminal, counterintelligence and terrorism investigations for the next 22 years in various locations throughout the world, including the Americas, Asia, Europe, and the Middle East.  His assignments included case agent for award-winning narcotics operations and homicide investigations in Southeast Asia; lead counterintelligence agent for the International Force East Timor; lead supervisor for the USS Cole Task Force; Assistant Special Agent in Charge, Central and South America; Chief, Overseas Counter-Terrorism Division; Chief of the Department of the Navy Multiple Threat Alert Center (MTAC); Special Agent in Charge, Washington Field Office; and Assistant Director, Intelligence and Information Sharing.  In 2006, he served as the Director of the Multi-National Force Iraq Strategic Counterintelligence Directorate, leading joint counterespionage and counter-terrorism efforts in Iraq during the height of the insurgency.  In 2010, Mr. Howard was named NCIS Executive Assistant Director, and concurrently head of all Navy Human Intelligence Operations.  He ultimately retired from NCIS in 2013.

Mr. Howard then returned to the Baltimore City State’s Attorney’s Office as an ASA in the Major Investigations Unit, prosecuting criminal gang members and violent repeat offenders. In 2015, he joined the Maryland Attorney General’s Office, serving as an Assistant Attorney General overseeing the statewide child support enforcement program, until appointed to his current position.